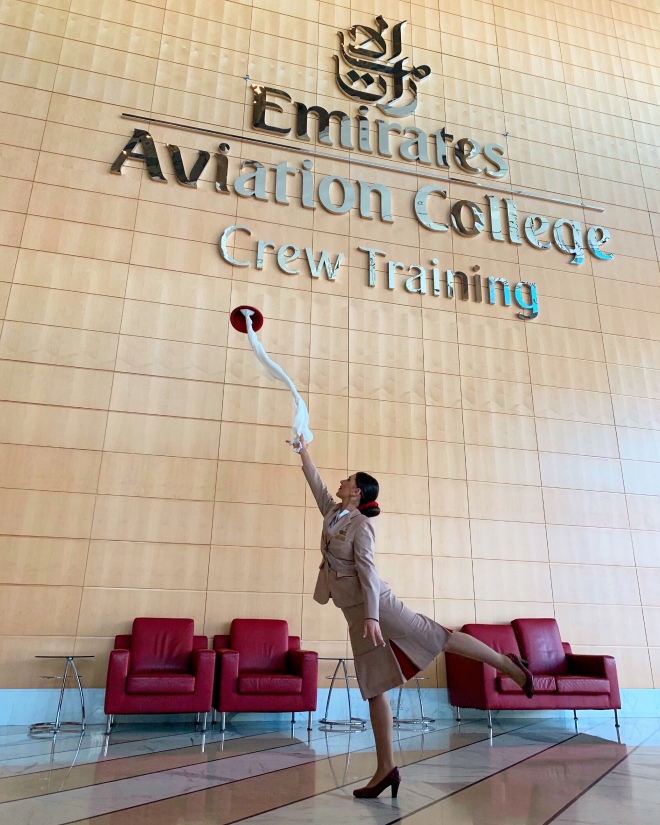 Hello dear readers, it’s been quite a long time since my last post. As I’m sure most of you are aware, I recently moved to Dubai to begin an exciting new job as Emirates cabin crew. I’m going to talk about my recruitment in another post however to sum it up, the reason for my resignation at Qatar Airways is because of this job opportunity with Emirates. With that said Qatar Airways will always hold a special place in my heart no matter where my location.

I’ve avoided blogging over the past couple of months as I’ve focused all my energy on my move and settling into Dubai. I also wanted to focus on the intense two months of training to obtain my flying license with Emirates. After the continuous 5am wake up calls, practical and theoretical assessments in Safety, Security, First Aid, and Service, I am now officially ready (by Emirates standard) to return to the sky. I’m so excited to get back to that addictive cabin crew lifestyle – breakfast in one country followed by dinner in another! I have really missed flying over these past couple of months.

A lot of people asked me if I would have to repeat the initial cabin crew training when I moved to Emirates. Even though I do know a lot of things regarding the aircrafts from previous experience, each airline has their own specific standard operating procedures so therefore it is essential that all new employees complete the initial training upon joining.

I’m not going to lie, the training is very intense and I swear to you after this second time, I will not put myself through another two months of cabin crew training ever again – twice is more than enough! 😛 It was painful having to redo the training and start again from the very beginning but what motivated me was the fact that by the end of it, I would be working for my dream airline. Originally when I decided to become cabin crew in 2017, my airline of choice was Emirates. At the time they weren’t hiring for a significant period… soon after this Qatar Airways had an open day in my hometown Melbourne and the rest is history!

The training was very similar to  what I experienced in Qatar, it composed of safety, security, first aid, and service. I have to say though, having completed training for both companies, the training facilities in Emirates are phenomenal. I was blown away by their amazing Boeing 777 and Airbus 380 simulators where we completed all of our practical assessments. It honestly felt like I was on board an actual aircraft having to perform emergency evactuations. The airline invests a lot of money into their training program and facilities for their employees. I feel so lucky that I got to experience this first hand.

Here’s a pic from my first day in uniform, one I won’t forget! 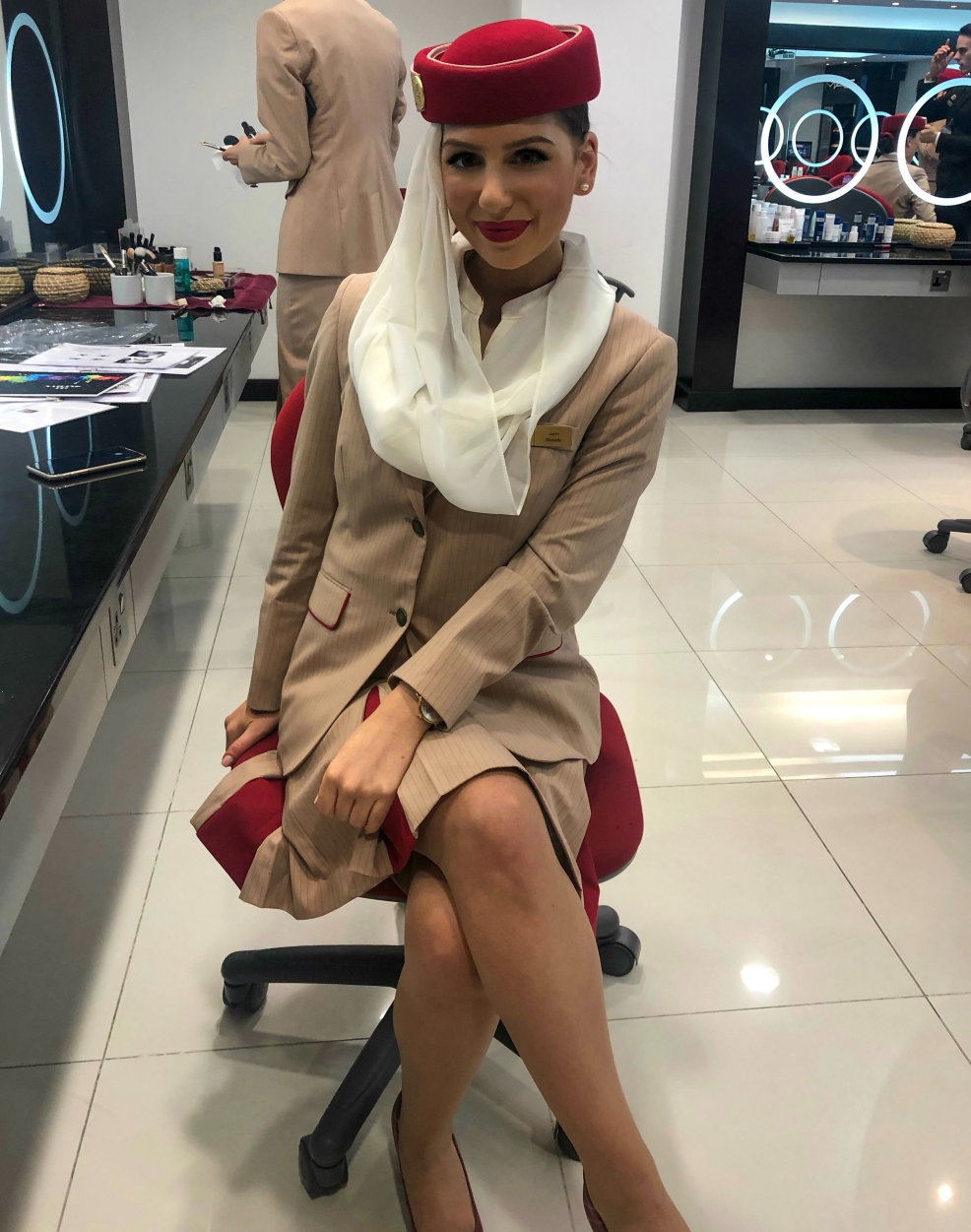 Yes it’s been a long eight weeks of training, however we do get the weekends off which is Friday and Saturday in the Middle East. Each weekend I have been exploring different parts of Dubai and so far I’m in love! I can’t believe the size of the city and how different it is from Doha. Dubai is so much larger than I anticipated and SOOOOOO much more modern than Doha. It definitely feels more like Melbourne to me, in terms of it’s fast paced nature. I love that their is so much happening each week, I definitely don’t feel like I’ll get bored here anytime soon.

Since it’s the best time of year to be in the Middle East (winter season) where the temperature is cooler and you can enjoy the pool clubs, beautiful rooftops and al fresco dining, I’ve been spending all my weekends doing just that! Hence why it would seem I’m living my best life on instagram each week 😛  I know that I won’t have weekends off from now on so I’ve tried to make the most of it throughout the training. I’ll be back to “what’s a weekend?” in no time! #crewlife

What better way to spend a weekend in Dubai than hiring a yacht to celebrate the end of training with my lovely batchmates! 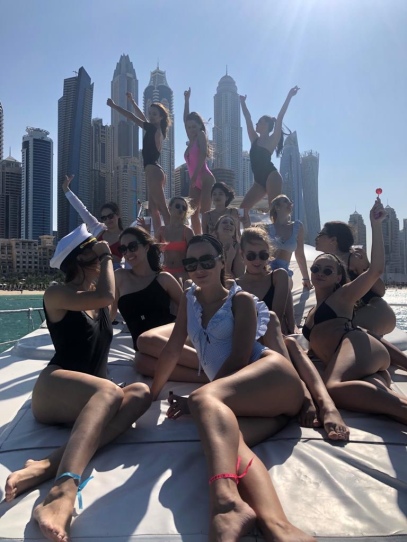 This was unfortunately the worst part of my move to Dubai (and it’s a bit of a first world problem I’ll admit) For those of you unaware, free of charge company provided accomodation is given to cabin crew employed with Emirates and Qatar Airways. I think the issue is that when I moved to Doha, I was super lucky to be allocated a brand new apartment, I was first occupier and was allocated the master bedroom. Also, the apartment was fully furnished including electrical appliances like TV, iron, microwave, etc.

This time around, I was not allocated a new apartment with electrical appliances provided or a master bedroom. I was also allocated accomodation near the airport which is quite far away from Dubai’s city centre which I would like to live near.

However on the PLUS side (Qatar Airways peeps you might be interested to know) is that at Emirates you can move accomodations FREE of charge after 3 months of joining! Each crew is entitled one free move which is very generous as in Qatar Airways you can only move after one year from date of joining and the move is charged.

I think I’m on a lucky streak because again I have been blessed with an amazing housemate. She’s from London, she’s a new joiner as well (one week behind me in the training) and the two of us are getting along splendidly. It’s nice when you not only share an apartment but can hang out as friends. As much as we both like living together, we aren’t fans of our living premises so after the 3 months I believe the two of us will attempt to move out. A lot of you might suggest that the two of us try and find an apartment together but the apartments we are looking at are in high demand and it’s hard to even get a vacant room there let alone two vacant rooms in the one apartment!

There are a lot of similarities and differences between Qatar Airways and Emirates from what I can see so far, however the biggest difference for me is the different nationalities of crew. First of all, if you read my first few posts upon joining Qatar Airways you will see that I explain how very little Australians are working there (from memory I think there were around 25 of us cabin crew).  Emirates on the other hand is a whole other story – there are many Aussies here including my beautiful batchmate Eda from Perth. I still can’t believe I FINALLY have a “mafia” of my own! (what we say when there is more than one of the same nationality on the flight)

Other than Australians, the majority of new recruits from my date of joining are from Europe including a large portion from the UK (hence my British housemate) It definitely adds a different vibe to what I’m used to in Qatar where the majority of crew are from Asia.

Another HUGE difference is the fact that there are less rules here like NO minimum rest or 4am curfew every night like in Qatar. Emirates treat you like an adult and allow you to manage your own time and personal life… it’s a nice change 🙂

There are times I do miss my old airline and I do miss a lot of my old colleagues but I’m really excited to start my journey here at Emirates and see what’s install for me in the year ahead. I have a feeling it’s going to be a good one, although the optimist in me says that every year 😛

My first flights and roster

Similar to Qatar Airways, before officially operating as cabin crew, you need to complete two “observer” flights for you to familiarise yourself with the aircrafts. My first one is on the Boeing 777 to Trivandrum in India (turnaround) and my second is a layover in London Gatwick on the Airbus 380 which will be my first time operating the huge double decker! I’m excited for the challenge ahead of me to operate this big bird. Also, might I add that this plane flies to Melbs so I’ll finally be able to operate the flight HOME!! I can’t wait even though I’ve been told some horror stories about Melbourne flight haha, it’s time for me to see for myself!

The most spectacular day of Dani’s month is always roster day! As I’m still on probation, I’m unable to bid for flights for the next 4 months, however I do hope that the rostering gods will give me some nice flights because I’m a newby!

I’m happy with my January roster in terms of destinations. I don’t have any new destinations except for Glasgow in Scotland but I love all the cities I’m travelling to. The only issue for me is that my whole roster consists of Europe flights, and as much as I LOVE Europe, may I remind you that we are now in the midst of winter and I am forever a sun/heat/pool/beach lover. Watch me enter January singing “The cold never bothered me anyway!!” (FROZEN reference)

I also have THREE turnarounds eek … My first Egypt flight to Cairo, Sialkot in Pakistan and Tehran in Iran.

One thing I’m still in awe about, is the fact that all my layovers are a minimum of 24 hours… it might not seem long for Emirates crew but for those of you in Qatar, you can probably understand my excitement. Last time I operated Moscow, I had approx a 12 hour layover so I’ll take the 24 hours any day!

Until next time, have a wonderful month XXXXX 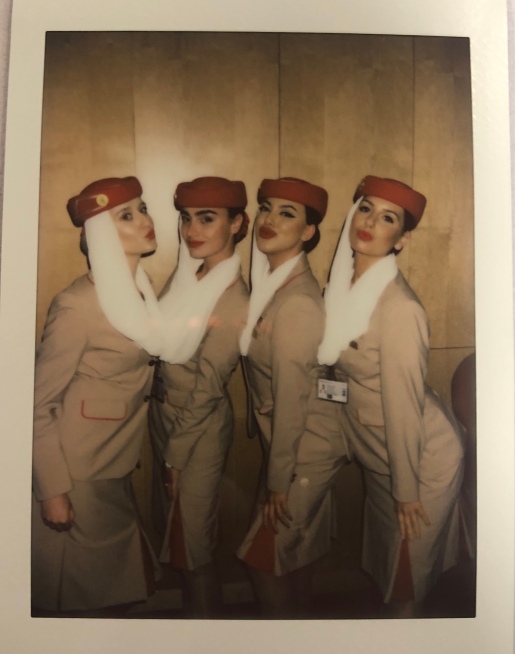